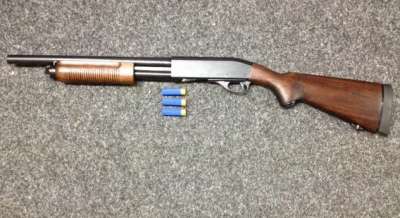 I always did like shotguns, heck yeah! There’s something about a .12 gauge pump that just grabs your attention right now. And I guess it’s also the fact that everyone knows that a shotgun can do some damage if it has to do so. You may be surprised as I recently was that there are many airsoft companies out there that produce gas powered shotguns that are very powerful and sophisticated. They actually operate like the real thing and replicate on an exacting basis all the functions of a real shotgun. Some of the functions vary depending on the brand of the product, I have seen where on these gas operated models the actual shells are loaded with gas and some are charged with gas by removing the butt-plate in the stock and charging as necessary. What is also interesting is that you have an actual shell similar to the real thing that you load with 6mm plastic bb’s and then load into the weapon just like the real thing. Pump the fore-stock and pull the trigger and when you pump it again it ejects the spent shell and loads another into the chamber. I’ve seen these in action on YouTube and they are pretty awesome, there is even a video a guy made where he loaded his shells with steel bb’s too see how much damage he could do to some glass bottles and aluminum cans, it’s pretty funny! The only drawback with some of these is that they can cost as much as a real shotgun but I suppose if you live in a area where the local laws do not allow the possession of a real firearm this is pretty darn close to the real thing. On this site I have a review of a spring powered shotgun that I really like, of course it doesn’t have the same features but it’s still pretty cool. So if you are interested in this type of weapon I suggest checking online or going to Youtube for more info. Of course I’ll probably be talking about shotguns more in the future because they are pretty darn cool!